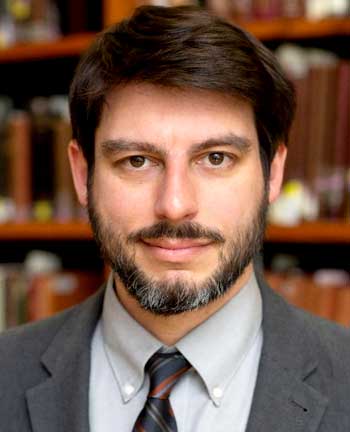 Board of Trustees of the Yonkers Public Library has appointed Jesse Montero to lead the public library system. Montero, a Westchester native, will take the helm of the largest public library system in Westchester County, with three branches serving a diverse population of 200,000. Montero joins YPL as Library Director after a 15-year career at Brooklyn Public Library (BPL), where he most recently served as Director of its landmark Central Library.

“We are delighted to welcome Jesse to Yonkers and to our public library system. With the experience Jesse brings in innovating libraries, and the deep community ties Susan Thaler has developed as Deputy Director, we have a dream team we know can lead the Yonkers Public Library to new heights,” said Nancy Maron, President of the Board of Trustees.

“The Board of Trustees has made an outstanding choice in Jesse,” said Susan Thaler, Deputy Director of YPL. “I'm excited for the opportunity to work with him to lead YPL into the future and to make this beloved community institution even greater.”

In recent years, YPL has gained recognition as a critical community resource partnering with the City of Yonkers, Yonkers Public Schools, Westchester County Government, and a wide array of organizations throughout the City. Initiatives have included a 30% increase in programming to meet the needs of the diverse Yonkers community; a $4.5 million multi-year façade renovation at the Will branch; and technology enhancements like the launch of Tech Central, a state-of-the-art tech center at the Riverfront Library, the first of its kind in Westchester County.

“I am honored to join the YPL,” said Jesse. “There are so many exciting things happening at YPL, and in Yonkers as a whole. I’m thrilled to work with the board, staff, and partners throughout the city to provide innovative and impactful library services to its residents.”

“The City of Yonkers sees the Yonkers Public Library as the jewel in the crown of this great City,” said Mayor Mike Spano. “We welcome Jesse, and are all excited to work together on this next chapter of this important institution.”

Jesse Montero was most recently director of the Brooklyn Public Library’s Central Library, where he was responsible for day-to-day public service operations for a 350,000 square foot facility that attracts over 1.2 million visits a year and whose collections have an annual circulation of over 1.5 million.

Throughout his career, Jesse has managed a diverse portfolio of technology, space planning, staffing and collections projects. While at BPL, he planned and opened the Shelby White and Leon Levy Information Commons at the Central Library in 2013 - then a groundbreaking training and collaboration space that has since been widely emulated by other public libraries. He has been on the steering team for BPL’s New York City Connected Communities program - a citywide digital inclusion effort - since 2011, and during that time the city awarded millions of dollars in technology and staffing support to Brooklyn Public Library. Jesse also helped plan the Technology Training Initiative, a staff development project that offered dozens of clerical staff a career pathway into technology instructor positions, resulting in improved public service and job satisfaction. As Central Library Director, he revitalized the building’s reading rooms through beautification and collections projects, and by wiring their reading tables with electrical outlets to better support laptop use by Brooklyn’s thriving freelance and creative community.

About The Yonkers Public Library
The Yonkers Public Library is the largest library in Westchester County and was established in 1893 to serve the citizens of the City of Yonkers. There are currently three branches; Riverfront Library, our main branch, in downtown Yonkers, the Grinton I. Will Branch on Central Avenue and the Crestwood Branch in the Crestwood section of the city. Our mission is to change lives every date. Our expert, trusted staff help all the people of Yonkers find the information they need, the programs they enjoy, and the reading they love. In 2018, the library had over 825,000 visitors, checked out 795,000 items, held 7,200 programs for adults, teens and youth and answered 364,479 reference questions. For more information about the Yonkers Public Library, visit www.ypl.org.