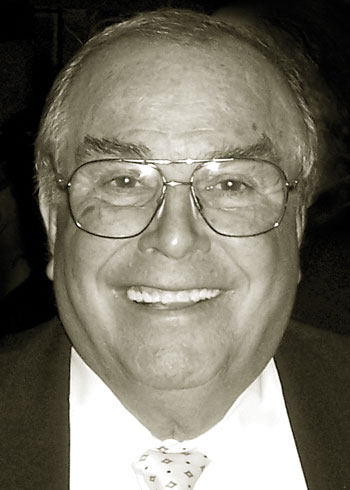 Angelo Martinelli, the longtime former Mayor of Yonkers passed away peacefully in his sleep in the early morning on Saturday, October 27th. He was born in the Bronx on September 13, 1927 to Ralph and Rose Martinelli and grew up in Mount Vernon where he graduated from A.B. Davis High School. After serving his country in the Army, Angelo met the love of his life, Carol Madatto, at RKO Proctor’s while working as an usher (she was a cashier). They were married in 1949 and began raising their family at 20 North 7th Avenue before settling in Yonkers in 1960.

His business roots were already there with his printing company, Gazette Press, Inc., and Angelo began his lifetime membership in the Exchange Club – and countless other organizations. He entered the world of politics in the early 1970s and was elected Mayor six times thereby earning the title which he was pleased to carry for the rest of his life. Proud of the many businesses he was able to introduce to Yonkers, he is most remembered for his principled stand leading the City through the early tumult of the desegregation crisis featured in the HBO miniseries Show Me A Hero (where he was played by his future friend, Jim Belushi). The Mayor may have lost an election doing what he thought right, but he earned the growing respect of his community.

Angelo was also an entrepreneur who published magazines which would develop into the family business, Today Media, Inc., where he, as Chairman of the Board, relished the success of Westchester & Hudson Valley Magazines, Delaware Today and Main Line Today. He may have left City Hall, but the Mayor was a ceaseless promoter of his beloved City serving as Chairman of the Yonkers Chamber of Commerce, the Queen’s Daughters Day Care Center and the Police Athletic League of Yonkers. He was also proud of his service as President of Henry S. Richards Boys & Girls Club and as a key board member of Hudson Valley Bank, St. Joseph’s Medical Center and the Untermyer Gardens Conservancy. Angelo was a devout Catholic and philanthropist who was honored to become a Knight of Malta.

He was a lifelong fan of his beloved NY Yankees, especially Joe DiMaggio, and a proud subway alum of the Fighting Irish of Notre Dame. And ask his children or grandchildren about his competitive nature whether on the golf course, the crap table or playing Monopoly. Above all, he loved his family. He was delighted to fund the magnificent restoration of the Temple of Love in Untermyer Park in honor of his marriage of 65 years to his beloved wife, Carol. They were so proud of the accomplishments of each of their six sons, their daughters-in-law and their grandchildren.

Words are so inadequate to describe his life, but he can be counted in the very first rank whether as a husband, a father, a brother, a grandfather, a great grandfather, a cousin, a friend, a volunteer, a veteran or a patriot. Angelo touched the lives of countless people with his boundless enthusiasm, generosity, support, selflessness and love. He will be missed by all who were lucky enough to have known him.

The family will be present at the Sinatra Memorial Home, 499 Yonkers Avenue on Wednesday and Thursday from 4 – 8 pm.

Mass of Christian Burial at the Monastery Church of the Sacred Heart on Friday at 10:30 am followed by interment at St. Mary’s Cemetery.