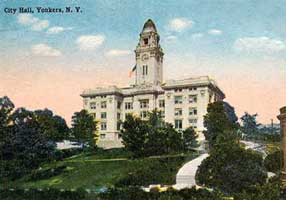 The City of Yonkers is the third largest city in New York State and the largest in Westchester County. Incorporated as a Village in 1855 and as a City in 1872, Yonkers operates under a "strong mayor" form of government, with a Legislative branch comprised of a City Council President and six City Council members, all of whom are elected by the citizens of Yonkers. The City Charter serves as the governing document for all municipal operations.

The Mayor serves as the Chief Executive Officer and oversees the daily operations of the city. The Mayor has the responsibility of appointing and directing all commissioners (with the advice and consent of the City Council) and makes all appointments to many of the city's boards, commissions and agencies, unless otherwise directed by state statute. Each year the Mayor is required to submit a budget to the City Council that outlines the city's anticipated expenditures for operating and capital costs. The Mayor serves as Chair of the Yonkers Industrial Development Agency and the city's Board of Contract and Supply. The Mayor is elected citywide to serve a fouryear term, for a maximum of two consecutive terms.

The City Council is the policy-making body for Yonkers, and achieves this partly through standing committees created for the purpose of researching issues and making recommendations to the entire Council. These committees include Rules, Budget and Finance, Community Development, Education, Environmental, Sustainable Growth and Green Policy Committee, Legislation Codes and Inter-governmental Relations, Municipal Operations and Public Safety, and Real Estate.