Looking for something artistic and cultural? Historical? Or would you rather spend the day in the park? The City of Yonkers abounds with a wealth of cultural, artistic and educational opportunities that are as diverse as the population that calls this magnificent city home. There are activities and sights to sate the cultural appetite of even the most discerning critic. It's all here in Yonkers and much, much more for any age and preference. 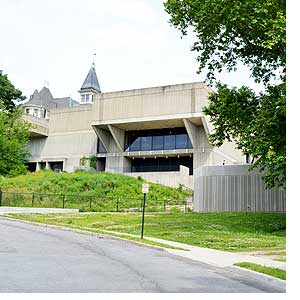 Founded in 1919, the Hudson River Museum is nationally recognized as a major cultural institution that serves Westchester County and the lower Hudson metropolitan region. Ever-changing exhibits can be viewed at the Museum's spacious galleries, and the restored Glenview, the John B. Trevor Mansion, reflecting the lifestyles of the turn-of-the century Yonkers, is open to the public.

Enjoy one of the Museum's weekly Sunday Family Workshops or if the sky is the limit, take in a magnificent star show or a breathtaking laser show at the state-of-the-art Andrus Planetarium, the only public planetarium in Westchester County.

Visit the Red Grooms gift shop, designed by the artist himself, or dine at the Museum café. You'll enjoy the cuisine as much as the magnificent views of the Hudson River and the Palisades. The Hudson River Museum combines art, history and science all in one location. 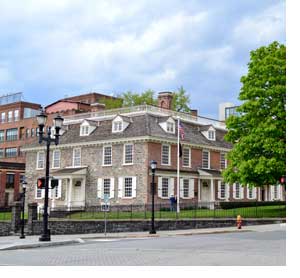 Visit the oldest building in Yonkers. Located in the downtown Larkin Plaza, Philipse Manor Hall was built by one of the richest families in colonial America, and served as the first seat of government for Yonkers. The vast estate, known as the Manor of Philipsburg, began under Vredryk Flypse, who came to America from the Netherlands and changed his name to Frederick Philipse after the British took possession of Amsterdam in 1664.

Considered one of the nation's great Georgian-style houses, Philipse Manor Hall earned national historic landmark status in October 1966. It has served as the site of special events, concerts, exhibitions and children's programs as well as public meetings. 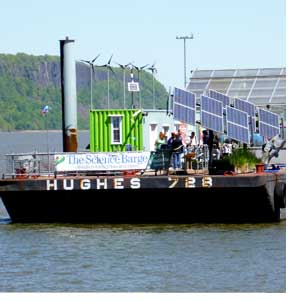 The Science Barge on the Hudson River

The Science Barge is an itinerant floating science museum now docked in Yonkers, New York, USA. It is also a working urban farm operated by the sustainable development organization Groundwork Hudson Valley, and designed by the New York Sun Works Center for Sustainable Engineering. The Science Barge grows crops using a hydroponic greenhouse powered by solar panels, wind turbines, and biofuels. The crops in the greenhouse are irrigated by captured rainwater and desalinated river water. Food is grown without carbon emissions, no agricultural waste is discharged into the watershed and no pesticides are used. The barge was designed by the visionary environmental engineer Dr. Ted Caplow. The Barge is open to the public. The goal of the Science Barge is to promote food production within cities around the world in an ecologically sustainable way. The Science Barge uses this goal to teach sustainability to students of all ages, and has an active education program for school and camp trips. 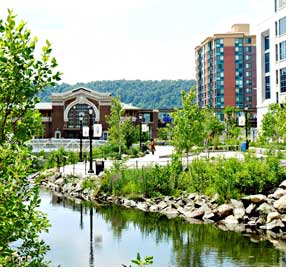 A two block section of the Saw Mill, a tributary of the Hudson River buried under concrete for nearly a century, has now been uncovered and surrounded by benches in a park like setting. Take a stroll or a picnic lunch and enjoy this engineering marvel. 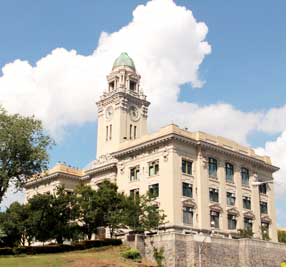 Designed by Edwin A. and H. Lansing Quick, and built from 1907-1910, City Hall stands atop a hill above South Broadway overlooking Nepperhan Avenue in the city's southwest corridor. Noted for its Beaux Arts design, the building features an impressive 100-foot domed clock tower that is visible for miles around. A marble entrance rotunda, the Mayor's Reception Room and the City Council Chambers, featuring murals depicting the history of Yonkers, complete the elegance and stately presence of the seat of local government. 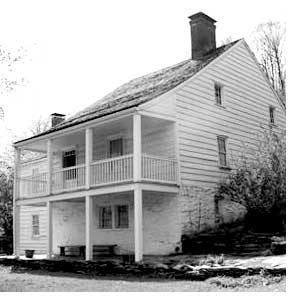 The Sherwood House, circa 1740, was built by Thomas Sherwood, a tenant farmer of Lord Frederick Philipse. Currently owned by the Yonkers Historical Society, Sherwood House is an example of a Pre-Revolutionary farmhouse. The Society furnished it with period antiques and is continuing restoration efforts on the house. To schedule a group tour, call (914) 965-1243. 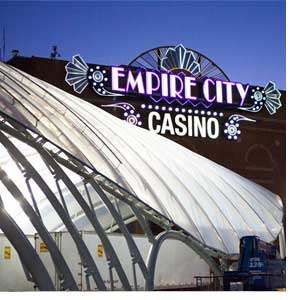 Yonkers Raceway was founded in 1899, as the Empire City Trotting Club, by copper magnate William H. Clark and grocery tycoon James Butler. From 1907 through 1943, thoroughbreds replaced harness racing where Seabiscuit was one of the many famous thoroughbreds that graced this track.

The Rooney Family acquired Yonkers Raceway in 1972 and has maintained live harness racing for over 35 years. Yonkers Raceway remains one of harness racing’s few year-round facilities, with world class racing available throughout the calendar. The racing schedule is Monday, Tuesday, Wednesday, Friday and Saturday with first post at 7:10 PM ET on all nights. Yonkers is the proud home of three major harness events, the Yonkers Trot, Art Rooney Pace and Messenger Stakes. The Yonkers Trot and Messenger Stakes are part of the Trotting and Pacing Triple Crowns, respectively, making Yonkers the only track to host legs of each gait’s Triple Crown. Yonkers Raceway augments its year-round harness scheduled with 12 months of simulcasting from North America’s leading harness and thoroughbred venues. Evening simulcasting accompanies all live racing programs, while afternoon simulcasting is available around the NYRA schedule (usually Wednesday through Sunday).

Empire City at Yonkers Raceway has a full variety of game themes, including the NEW multi-layer display reels and other reel and video games such as Wheel of Fortune, Video Poker; Progressives and Keno; with individual and multi-denominations ranging from 1 cent to $100: Wheel of Fortune, The Hangover, Sex and the City, Quick Hits, Mr. Cashman, Red Hot Jackpot Progressives, Jackpot Party

Today, Empire City has 5,300 of the hottest slot machines! If you like table games, Empire casino offers electronic roulette, electronic craps, electronic Sic-Bo and electronic baccarat. Bets range from $5 to $1000. The Entertainment Lounge in Gotham Palace features live music and great shows all week long. Empire City Casino at Yonkers Raceway offers a variety of eateries, for every guest’s style.

The Yonkers Hudson Riverfest is a cultural and environmental festival held on the banks of the Hudson River and along the city's waterfront every September. Activities include environmental exhibits, live music, arts and crafts, international foods, games and amusements, street performers, free kayaking and strolling musicians. Non-stop Free Entertainment for the whole family!

The Yonkers Department of Parks Recreation and Conservation plays an integral role in developing and presenting cultural programs for the city's residents. The Untermyer Performing Arts Council is a free performing arts series held on Saturday nights during the summer. These events include opera, dance, modern and classical music, as well as chamber music. For information, contact the Department of Parks, Recreation and Conservation at (914) 377-6450.

The Yonkers Philharmonic Orchestra is a semi-professional community organization sponsored by the Fine Arts Orchestral Society. The Orchestra is dedicated to promoting and supporting live symphonic music, performing four times a year at Saunders Trades and Technical High School on Palmer Road and in the past has performed outdoors at the Cross County Shopping Center, Getty Square, the Hudson River Museum, the Yonkers Marina and Untermyer Park. The Orchestra and Society annually hold a concerto competition, awarding monetary prizes for aspiring classical musicians. For information, call (914) 963-2178.

The Male Glee Club of Yonkers is one of the oldest non-collegiate male choruses in the United States and is celebrating its 86th year. From the beginning, the goals of the club have been to promote the good fellowship that comes from singing together. The Yonkers Male Glee Club has two concerts a year at Saunders High School, perform at numerous City events and entertain at local nursing homes and senior residences.